Son Alegre‘s Miquel Manresa was recently asked to give an interview by the new magazine ConCiencia, published in Palma on a monthly basis and now only in its second month. The interview was published in the issue of December 2016 under the heading ‘La tierra tiene la última palabra‘ (The soil has the last word). We at Son Alegre are very happy about this published feature and would like to give you the opportunity to see and read it for yourself.

For those of our friends who might struggle a bit with the Spanish language, here is a brief translation of the interview:

THE EARTH HAS THE LAST WORD

The owner of Son Alegre, Miquel Manresa, proudly shows us his vineyard, a perfect example of how Nature looks after herself.

Our walk begins by listening to the “sound of the earth”. This man is in love with his work and his vineyard; he lets us participate in his dialogue. He speaks with each stone, with each branch, and each animal or insect, thanking them for their contribution and collaboration so that this land enables the fruit produce to give us the best 100% ecological wine.

The land is doing the cultivating process all on its own. There is no need for us humans to do what roots, worms and microorganisms can do best. In addition, the act of ploughing the soil alters the natural environment and promotes the growth of weeds. Miquel tells us with absolute conviction that only through respect and love of Nature we can find the balance and harmony we have lost and which we do need so much.

Miquel continues to tell us that the vineyard is cultivated according to the principles of Fukuoka [1] which implies a “total respect for Nature and the environment”.

The particular weather conditions of our land give our wine the unique and special qualities it has. The cold air coming from the sea is reacting with the warmer air which has been heated by its contact with the warm earth and this encounter generates a fresh air stream during the hot summer afternoons.

We tend to believe that it is the grape which gives the wine its flavour, when it really is the land on which the grapes are cultivated which creates its particular taste. This is due to the typology of the soil, providing some elementary nutrients to the vines and also partly due to the microclimate of the area.

At Son Alegre we grow vines on 15 hectares at two different locations, one on the edge of Santanyí, in the area between Son Danus and Ses Angoixes, and the other one in the neighbouring area of Can Taconer in Calonge.

For us, growing the grapes is an opportunity to live out our fascination for the wonderful complexity of the natural environment. We use the classical methods of practice in viticulture and oenology. The grape harvest is done only by hand and in crates, the pressing is done the traditional way, the fermentations are facilitated with indigenous natural yeasts and the barrels used for the ageing of the wine are made of French oak.

At Son Alegre, a very important tool for our work is the lunar calendar. By observing the phases of the moon, the way our ancestors always have done it, we know the most propitious time for the pruning of our fruit, the grafting of plum on to almond branches, the planting of new trees, the planting of cereals, the harvesting of our grapes, the mating of pigs, sheep or horses, or even the cutting of our hair.

He speaks very animatedly, explaining all the intricacies of the finca, that we find it slightly difficult to follow and, more so, transcribe so much information in a single interview.

Nature creates and gives peace, supports us and helps us to find a balanced state of equilibrium, just what is needed so badly in our times. Here, the conversation focuses on education and the importance of keeping children in permanent contact with a natural and healthy environment. *

* ConCiencia and MundoFeliz propose to our readers to use this special set-up to hold workshops for schoolchildren, to give the young ones an opportunity to connect with the land.

We could spend hours and hours talking to a person who conveys so much ancestral wisdom, learned through the work which he carries out day by day in his vineyard, being continually connected with Nature which he loves and so deeply respects.

Miquel, it would be an honour for us to have you at some of our conferences and events. You will always have a special space in our magazine. And of course, we will taste your wines!

To which he responds, with his usual relaxedness, being as calm and cheerful as is his land, that he will gladly share his knowledge with us, our readers and friends. 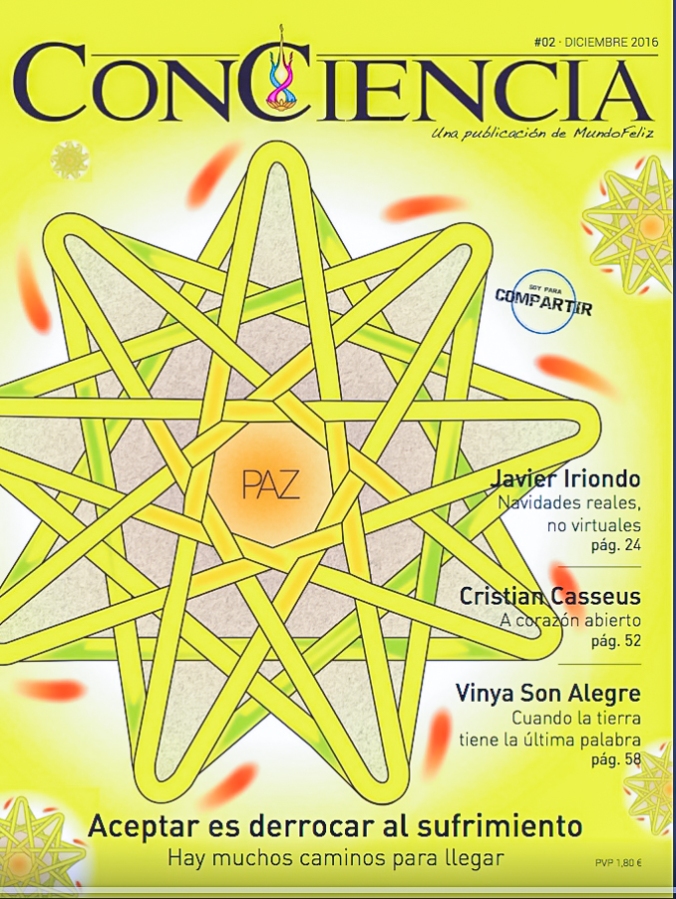 [1] The Principles of Fukuoka:

• Do not plough or turn the soil: In this way the structure and composition of the soil is maintained with its optimal conditions of humidity and micronutrients.

• Do not use chemical fertilizers or prepared compost: Through the interaction of the different botanical, animalistic and mineral elements of the soil, the fertility of the cultivated soil is regenerated as in any non-domesticated ecosystem.

• Do not use herbicides or weed killers: These destroy the nutrients and microorganisms of the soil, and are only justified in monocultures. Instead, Fukuoka proposes an interaction of plants to enrich and control the biodiversity of the soil.

• Do not use chemical pesticides: These also kill the natural richness of the soil. The presence of insects in farming can be healthy.

• Do not prune: Allow the plant growth to follow its natural course.

These fundamental working principles are based on a philosophy of Do- Nothing (Wu Wei), or more accurately, of not intervening or forcing things.

Fukuoka reached a degree of comprehension of the microsystems of the soil and devised a system of farming that desists from unnecessary tillage and unnecessary endeavours of traditional agriculture. His method, which he sometimes called Natural Agriculture Mahāyāna, is based on starting to give and to then receive in a natural way, rather than be demanding on the soil until it is exhausted.