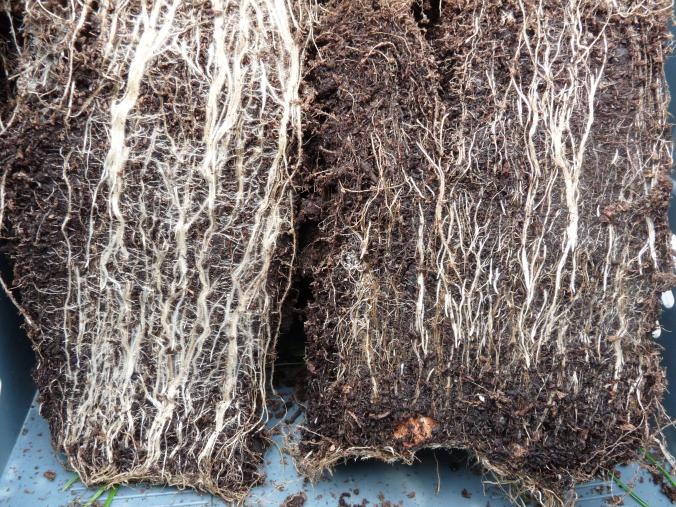 The human race is a funny species. We generally tend to think that things that we don’t see can’t matter much. The invisible is not important to us, or so it seems.

When you drive through the Mallorcan countryside, or any countryside in fact anywhere in the world, you will see that farmers are busy working their land with heavy machinery, ploughing their land with tractors and tilling the soil as if there was no tomorrow. What many people don’t realize is that in doing so, the soil composure is likely to be broken up, the organic structure of the layers of soil is disturbed and sometimes destroyed and the microbial cosmos of the soil and subsoil, by and large invisible to the eye, is damaged, shocked, distressed and traumatized, and sometimes devastated beyond repair.

A major organism living just below the surface of our soil is a fungus called Mycorrhiza (Greek Mukes, meaning fungus and rhiza, roots), forming a symbiosis with the host plants, in our case, the vines at Son Alegre. The Mycorrhiza fungi has been shown to be important or even essential for plant performance. Mycorrhizae live on the roots of more than 80% of Earth’s plant species, including most herbs and flowers, grass, cereals, legumes, trees, fruit and vegetable, ferns and mosses. The American plant pathologist, Stephen Wilhelm, is quoted as saying: ‘… in agricultural field conditions, plants do not, strictly speaking, have roots, they have mycorrhizae’.

Mycorrhizae are unable to produce their own food which is why they attach themselves to the host plant and receive sugar from that plant in exchange for nutrients and water. This process, in turn, improves the growth of the host plant and favours rapid rooting.

When water is abundant, the Mycorrhiza system stores water for release at a later stage when the host plant is stressed for moisture. The fine hairs (hyphae) that make up the body of the Mycorrhiza are able to get water and nutrients from the tiniest soil crevasses and deliver these to the host plant. 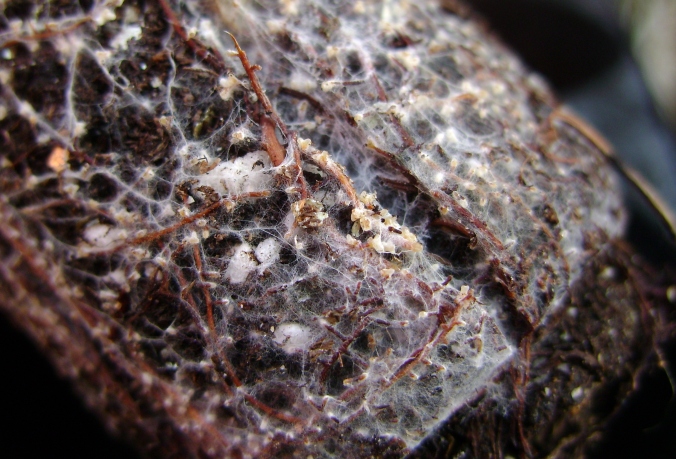 The Mycorrhizal fungi are said to have been around on earth for 450 million years or so.

Allow us to quote from a source that seems more expert than us in such matters (Acres USA):

But Mycorrhizal benefits do not stop there. These fungi also play a definitive role in a plant’s natural defense against fungal root diseases such as Pytophthora, Fusarium, Phythium and Rhizoctonia.

Mycorrhizal fungi produce and release suppressive exudates such as antibiotics that inhibit infection by these and other fungal root pathogens. Studies have documented that Mycorrhizae also defend root systems by forming a physical barrier to deter invasion by soil pathogens. 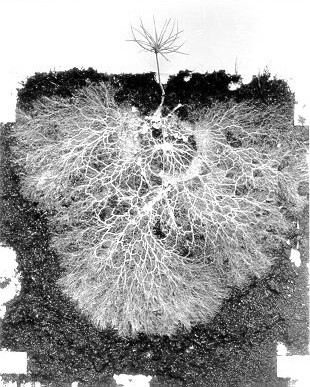 We stated before on this blog that at Son Alegre we feel that we could not produce the grapes for our wine without the help of our friend, the Ladybird, or in the absence of a little help from our most valued collaborator, the common Ant. Well, we would be equally stranded, we fear, if it was not for the Mycorrhiza fungi. There, we’ve said it.

(Note: The photos and images in this blog entry were not taken on our own land but were borrowed from the Internet. Thank you.)